So I was looking at the eligible 9th game for EVO donations over the weekend. I was psyched to see Pokken and MvC3 battle for the most donations. It made for an amazing drama. But of course, then I looked to see how the other games have managed to fair in the donation drive and it’s…well…different.

The top games are MvC3 with $15,458 and Pokken with $11,610. From there, the donations don’t just tapper. They literally fall the f%ck off. KI with $4,942, Skullgirls with $672, and freaking MKXL with a measly $135 dollars. Even Street Fighter II Turbo managed to get more donations than MKXL, a game that pretty much sent Sonic Fox to college debt free. 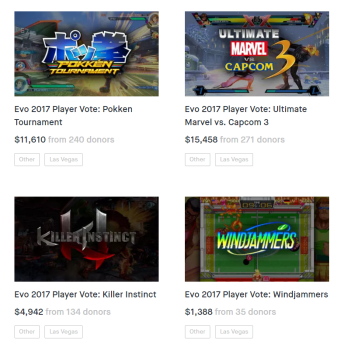 Aside from Arms being a troll game, I’m a little surprised to see how fickle some communities can be with “their game”. I remember the blow up on twitter after Level|Up Series announced that they wouldn’t have KI or MvC3. The Marvel Community seems to maintain their consistency while KI, on the other hand, seems to be kinda wavering. Then again, maybe they aren’t.

After doing a little digging on the Level|Up Series Facebook page, I noticed a survey done by follower of the page asking “Do we want Marvel?” In a not so surprising series of events, 349 votes responded, “Yes, WHEN’S MAHVEL”. The KI response on the other hand received 36 votes. The interesting thing is there were only a few vocal about the lack of KI at SCR. 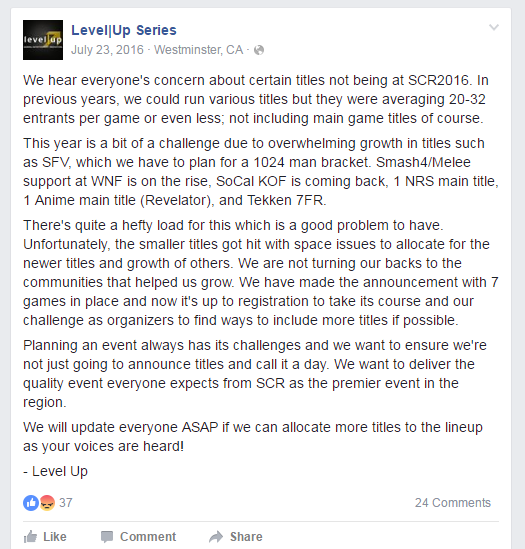 In a way it kinda makes sense considering that many that play KI don’t really need to attend a physical tournament. With excellent net code, the only real reason to go would be for a pot bonus or to participate in KI Cup. I guess I assumed that the KI community would be just as vocal, if not more than, the Marvel community. After all, once the outcry went out, a total of 79 entrants showed out for MvC3 while 51 entrants showed for KI at SCR.

Looking at the numbers of donors, I guess it’s a little sad to have seen so many people upset about KI nearly not being in SCR but when it comes to EVO little support. I mean, at least KI is doing better than MKX and Skullgirls but jeez man. I guess community support for the sake of the game is rare. Maybe pot bonuses are the driving force for some games.

I guess all isn’t too bad. The Marvel community really stepped up in representing their game. Just a little sad not all communities are the same way.